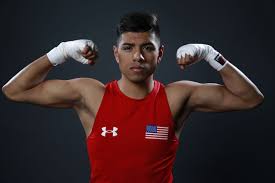 Carlos was born on 14th of August 1996 in Santa Maria California. He was qualified to compete in the 2016 Rio Olympics for USA. He was the first child in his family that was born in America. His grandfather was the first in his family that came to the United States. He left his Wife and family members in Oaxaca Mexico to work in strawberry fields. After earning enough money, he eventually saved it all up to bring the rest of his family to America. While growing up in Santa Maria, Carlos was first taken to a boxing gym for punishment. He was punished for fighting with his friends in the streets and getting suspended from school. Carlos was coached by his Xenon Balderas and his uncle David. Carlos then fought in the 2015 Pan American Games that was held in Toronto Ontario, Canada, Carlos first boxed in the men's lightweight event. He then recieved a bye to the quarter finals and was defeated by Lindolfo Delgado of Mexico.
Posted by Sela Mapapalangi at 11:43 AM 3 comments: